When Shauna Page and her boyfriend, Fernando Ruiz first rented the location of what is now the Tortilleria Nixtamal restaurant in 2008, their intention was solely to sell homemade tortillas. They wanted to create tortillas as people do in Mexico – using natural ingredients and no preservatives with actual corn instead of corn flour, Page said.

Now, seven years later, they’ve done that and more. Tortilleria Nixtamal sells more than 5,500 pounds of tortillas a week to about 175 clients, mostly restaurants in New York City, Connecticut, New Jersey and Massachusetts and in August, opened a tortilla production factory on Northern Boulevard in Corona. Meanwhile, the restaurant, which opened in 2009, has its own loyal following of diners who love its authentic, traditional recipes developed with help from family members, trips to Mexico and Internet research.

“People in New York always complain about Mexican food,” said Thibault Courtois, a marketing manager at Queens Theatre in Corona and a regular customer. “Whenever I hear someone complain, I bring them here.” 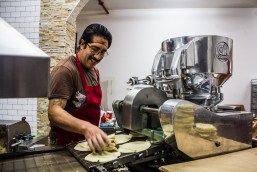 According to Tortilleria Nixtamal owner Shauna Page, factory workers start making the tortillas at 10:00 p.m. and work throughout the night. When big orders come in, they’ll sometimes staff the factory around the clock to get the tortillas done, Page said. 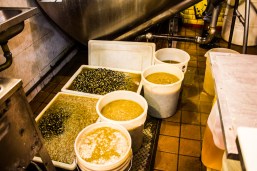 Tortilleria Nixtamal makes the tortilla dough from real corn rather than corn flour. Workers put 20 bags of dry corn in a vat of water before adding calcium hydroxide powder, which helps the masa bind together. They heat the corn until it reaches 200 degrees and then move it to the grinder. 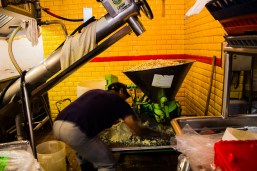 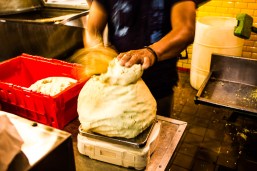 Until all of the equipment has been transferred to the new factory, the masa is created at the restaurant and brought to the factory to be made into tortillas. 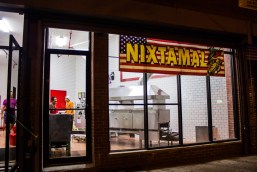 This is Tortilleria Nixtamal’s new factory that opened in August. The entire tortilla-making process takes about 12 hours. 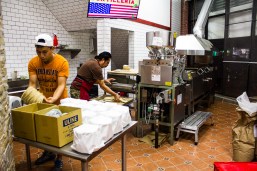 Tortilleria Nixtamal’s general principle is to not compromise when it comes to its product, Page said. “When our clients say ‘jump,’ we do.” 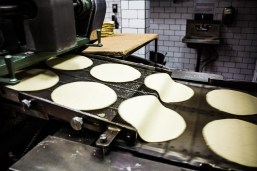 Once the masa is prepared, it is placed into a machine that is adjusted to make dough into round tortillas. The tortillas can be shaped into different sizes. 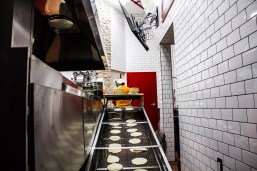 Tortilleria Nixtamal started with three employees including Page and her partner, Fernando Ruiz. Today, they employ 30 people that help with the factory and the restaurant. 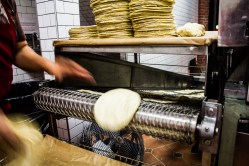 Page said their best form of promotion has been through word of mouth. People hear about their tortillas from different chefs around the city and from food blogs. It doesn’t hurt that they were featured on the Food Network show, Diners, Drive-ins and Dives. 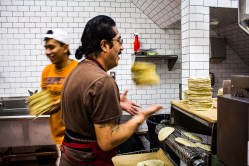 According to Page, they are blessed to have their business doing so well, but it’s not always bliss. “It’s amazing how far we’ve come,” she said. 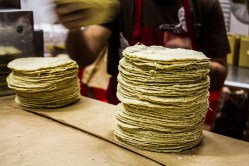 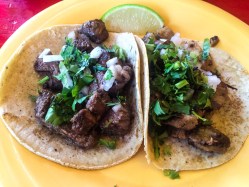 Tortilleria Nixtamal is popular for its tacos. Pictured here is a steak taco (left) and a carnitas taco (right).

While Tortilleria Nixtamal has perfected its recipes, growing the business hasn’t always been easy, said Page. Prior to opening, Page was working as a business consultant and Ruiz, a first-generation Mexican-American, was (and still is) a firefighter with the New York Fire Department. They launched the venture with $40,000 of their own money, much of it from Page’s divestment of her entire 401k.

Money was tight in the early days, said Page, noting they were lucky their landlord didn’t demand rent on time.

“When you start out, you can barely pay rent, gas and electric,” Page said. “For someone who’s always paid their bills on time and then not being able to pay them, it gets stressful.”

They’ve moved on from those early struggles. Now, whatever profit they make is reinvested in the business, Page said, whether that means opening a tortilla factory, buying new machine equipment or adding to their 30 employees.

In 2013, Tortilleria Nixtamal grossed $1 million in revenues and is expecting gross revenues of $3 million in 2015 with the combined profit from the restaurant and tortilla wholesale, said Page.

The restaurant brings in about 40 percent of the revenue and wholesale tortilla sales bring in 60 percent, she said. Once tortilla production has moved entirely to the new factory, Page expects the wholesale to bring in even more revenue.

“The quality of the tortillas are the norm in Mexico but can’t be found in the U.S.,” said client Peyton Powell, the executive chef at Pachanga Patterson in Astoria. “Customers inquire if we make the tortillas in-house because you can taste the difference in quality.”

At Dos Toros, which has several locations in Manhattan and has been using Tortilleria Nixtamal tortillas since 2009, the thicker texture allows the chefs to use just one per taco. That’s a plus, said Marcus Byrd, the restaurant’s marketing coordinator, given that they sell about 3,000 tacos a day. The chefs also like the tortillas, Byrd said, because “they taste corny in a good way.”

All photos and captions by Sarah Ravani/The Ink