A ferry ride away from the Bronx’s City Island lies a mile-long stretch of land where over one million of New York’s unclaimed bodies are buried.

Located just east of the Bronx, Hart Island, with 101 acres, it is the largest cemetery in the nation, containing over 300 burial plots for 150 adult coffins apiece. Although the island has been the city’s number one burial place for the poor and unclaimed since the late 18th century, the general public has never been allowed to visit — until three months ago, in July, 2015. 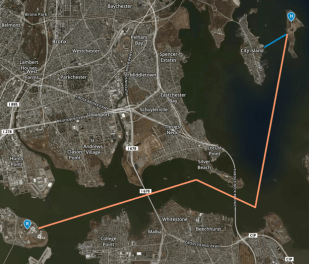 Because of this, individuals like Doreen Gallagher will be able to visit their loved ones on the island for the first time. The 53-year-old Long Island nurse plans to visit Hart’s island with two of her five siblings to mourn a sibling they never knew.

The green-eyed, Irish American was raised in the Kingsbridge section of the Bronx. Born to religious Catholic parents, Gallagher and her five siblings grew up constantly reminded of their lost family member and their parents’ anguish.

The year was 1960, and their 30-year-old mother, newly married, realized her first pregnancy was ending in miscarriage. She called a devout friend who later baptized the unborn child, wrapped it in towels, and drove with the distraught Gallagher couple past several public and non-Catholic hospitals to St. Vincent’s Catholic Medical Hospital in Greenwich Village.  The couple assumed their baby would be buried according to Catholic traditions.

A year later, as the Gallaghers were expecting their second child, a notice arrived in the mail. It was a bill from the City of New York, charging the couple for their first child’s burial on Hart Island, where New York’s poor and unclaimed had ended up throughout history. “The burial was an important ritual, and that was stolen from them,” Doreen said, with anger, recounting the story.

The couple went on to have six children between 1960 and 1968. Although they moved forward with their lives, they never forgot the heartbreak of their first born, reminding each of their children of the loss every year.

The recent settlement allowing public access to the island has lifted a weight from Doreen Gallagher. She is planning a visit to her sibling’s grave. Ironically, the young nurse had lived on City Island for nine years, the spot where the Hart Island ferry docks. “I would drive by there, walk by there, and thought over all these years, ‘Wow, I wish I could go there,” she said.

Gallagher was invited by her 29-year-old neighbor, John Doyle, to attend meetings at a small community organization called the City Island Civic Association. The association is comprised of 200 Bronx natives who have pushed for public access to Hart’s Island since 1950.  For years they have fought the city’s plans of repurposing the island, including proposals to make it a power plant, prison camp, and isolated homeless shelter. 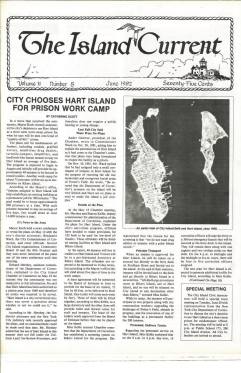 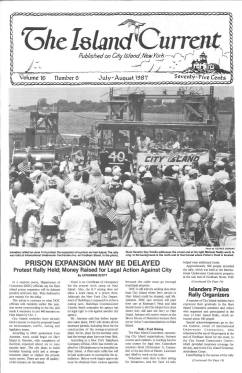 “The Community Board had to be prodded to bring the bill forward,” said Doyle, who has been active in politics since the age of 21. So Doyle said he went straight to the borough president and local state council members to get behind their demand to open Hart Island to the public.

According the the Department of Corrections historical site, access has been restricted to the burial ground for decades. The City purchased the island at the end of the 18th century. Between the late 1800’s and early 1900’s, death loomed on the island. It became known as the place to confine large groups of indigent people. Institutions on the island ranged from prisons, mental asylums, and hospitals. In the late 1800’s, the Department of Corrections and its Rikers Island inmates began the work of burying New York’s poor and unknown.

Within their first year, 1,875 people were buried. Lo- income men, women, and children were all stacked beside each other in cramped coffins, then buried deep into the earth.

Throughout the years, the body count on the small island has grown, and with it New York’s curiosity. It was in 1890 that the island’s primitive burial practices came to light after Danish American photographer Jacob Riis published How the Other Half Lives.

The now famous book contained several photographs of prisoners carrying shovels lifting thin coffins, and burying them in tightly confined spaces. Before this, no one had seen where the poor were buried. Only inmates and corrections officers were granted access to the Island. More than one hundred years later, very little has changed.

In July of 2015, Councilwoman Elizabeth Crowley pushed to allow family members and the general public to visit the once exclusive island. Still, visits by family members like Doreen Gallagher’s are still not simple.

To schedule a visit, individuals must scroll through the Department of Corrections main website and fill out a request form. If the individual requesting permission is family, he or she must present proof of their relationship to the deceased. If accepted, the individual will be granted access to the gravesite. All other individuals visiting the island are only allowed to visit an outer gazebo.

The gazebo is located at the very tip of the island and is highly regulated. Although it is located only steps from the ferry, visitors must check all their belongings including their electronic devices. Visiting this cemetery is much like visiting a state penitentiary, perhaps more confusing because many of the bodies in the graves are relatively unknown.

However, according to Julie Bolcer, Director of Public Affairs at the Chief Medical Examiner’s Office, the identification of the dead may slowly be changing. Between DNA samples, medical records and other forms of identification, more families are being alerted of their loved one’s passing.

When someone passes away, the Office of Chief Medical Examiners is notified. The body is then delivered by the examiner’s morgue staff and brought to their offices in Lower Manhattan where they perform an autopsy. Depending on the cause of death, the body may be stored in the morgue for up to a month based on federal regulations.

If the Medical Examiner believes the deceased has family or relatives based on the objects found with them, he or she will contact the Public Administrator’s office to find these individuals. If not, the body is delivered in a van to Hart Island.

In Bronx County, Matilde Sanchez is the Deputy Public Administrator. The 60-year-old’s office is cluttered with boxes of legal documents of the deceased, including pictures, checks and other memorabilia. The lobby outside her 851 Grand Concourse office is a cold, blue marble.

Sanchez is in charge of formally investigating the deceased with two investigators. Together they sift through documents in an effort to find an heir or heirs of the estate. “Potter’s field is not the place you want to send a relative to, it’s unclaimed graves,” said  Sanchez. “We try to keep people out of there. We try to look for funds so that we can send them to a regular burial.”

Often, families do have the money for a decent burial. The least expensive coffin and funeral arrangement costs $10,000. When the families are unable to pay, the bodies are taken to the Chief Medical Examiner’s office and later, to Hart Island.

The board of health prohibits the bodies from being stored in the morgue any longer than a month. This one-month window grants family members time to find their loved ones and take their bodies to a private funeral home.  However, like the Gallaghers, many families do not find out that a loved one has died until much later.

When they do, the costs of disinterring the bodies are both inconvenient and expensive. “It’s a mass grave,”said Mike Johnson, a leading pathologist at Jacobi Medical Hospital. “They are stacked on top of each other So can you imagine? If somebody wants to find Mark Brown, but Mark Brown is at the bottom, that’s very costly. You have to remove like 30 bodies to get to one.”

In addition, finding the deceased on the Island can be difficult. To successfully locate the individual, the Department of Corrections relies on a number attached to each body in their burial plot.

While some bodies may be fully identified, including their name, age, and origin, others are categorized as Male and Female Unknowns.

This intrigued writer and artist Melinda Hunt. In 1991, she collaborated with photographer Joel Sternfield to create a project called the Hart Island Project, a non-profit organization working to reunite families to their loved ones.

Their online database called the “Traveling Cloud Museum” consists of an interactive map with detailed information regarding each burial listing. Unlike the the Department of Corrections site, the Hart Island Project site is clear and easy for families to navigate.

The Hart Island Project has worked with community groups including the City Island Civic Association to change public policy regarding visitation and access to burial records. Although many Hart Island policies have improved over the past year, Hunt and the association continue to strive for change.

Alongside council member Elizabeth Crowley, the two groups are working together to make the island the city’s newest public park. Crowley sponsored a bill which would put an end to visitation restrictions, granting the public access to Hart Island without going through the Department of Corrections.

Over the past several months, the City Island Civic Association, along with several of New York’s Community Boards have all voted in favor of the park bill. To move forward, the bill must go through a public hearing, the city council, and finally mayor Bill de Blasio to be passed.

“Every New Yorker should have the right to visit, without having to go through the (Department of Corrections) process. My goal is to open up more of the island, and make it more visitor-friendly,”Crowley told the  NYDailyNews.