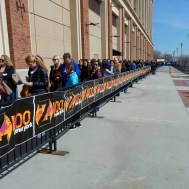 Over 300 contestants waited their turn to audition to sing the National Anthem at the Subway Series Mets game on August 2. 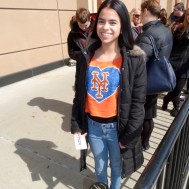 “I’ve been a Mets fan since I was born. I’ve got my shirt on and I’m ready to go!” Gia Santiago, 14, is currently starring as Belle in the production of “Beauty and the Beast” at Hoboken Junior Senior High School. 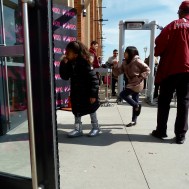 Younger contestants skipped gleefully into the audition area, excited for the chance to perform in front of thousands. 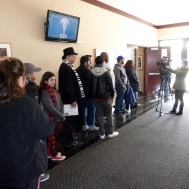 Once contestants arrived at the front of the line outside, they moved up to a smaller line inside of the stadium, just outside of the judging area. 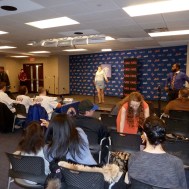 Contestants were given 60 seconds max to sing a song of their choice a cappella. The only song off limits was the National Anthem. 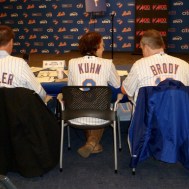 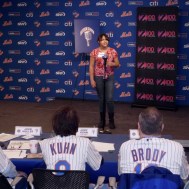 Singers of all ages were invited to audition. 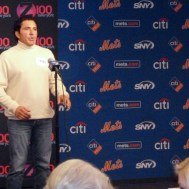 Those selected to the final round of auditions will be notified by the end of the day.

Eleven-year-old Elizabeth Fitzpatrick called in sick at her Staten Island middle school this morning, but the sixth grader was perfectly healthy. She spent the day at Citi Field in Queens, as one of more than 300 contestants auditioning for The New York Mets 2016 Anthem Search.

“My dad and I watch every Mets game together and it’s our favorite team,” said Fitzpatrick. “I am a little nervous but I think I’ll do good.”

After standing in line outside with her parents for nearly three hours, Fitzpatrick entered a conference room inside the stadium where she sang “America the Beautiful” a cappella in front of three judges: Skeery Jones, a Z100 radio personality, PIX11 news anchor John Muller and Tony Award-nominated singer and actress Judy Kuhn.

If selected, Fitzpatrick will sing the National Anthem on August 2 at the Subway Series home game against the New York Yankees. Mets Marketing Manager Harris Schoenfeld described the Subway Series as “the biggest game of the year” because of the longstanding rivalry between New York’s two professional baseball teams.

Mets season-ticket holders could preregister for the 2016 Anthem Auditions, and organizers also invited the first 150 people in line from the general public to try out. Hopefuls sang songs of their choice a cappella, but the National Anthem was the only song off-limits.

Within the first two hours of tryouts, more than 150 contestants performed; that is more than the total number of contenders at the 2015 Anthem Auditions. The tryouts lasted from 10 a.m. until 2 p.m.

The Mets lost 2-7 in Game Five of the 2015 World Series, making the Kansas City Royals the MLB’s championship team. The Mets’ had not been to a World Series since 1985.

Lifelong Mets fan and professional singer Maria Claire, 61, said auditioning to sing the National Anthem at Citi Field had always been on her “bucket list,” but the Peekskill, N.Y. native almost didn’t make it to tryouts this year.

“I thought about staying home this morning because of the attacks in Brussels,” said Claire. “But then I thought about how the Mets helped us all get out of our 9/11 sadness, so I thought this was something I needed to do.”

Claire is a member of the “Happy Mets Fans” Facebook group, which she described as a “great group of positive Mets fans.” The club hosts Mets-themed meet-ups throughout the year and encouraged Claire to attend the Anthem Auditions. “They would want me to be here right now. Staying home because of the attacks wouldn’t have accomplished anything,” she said.

While many contestants were self-described diehard Mets fans, Danielle O’Keefe, 27, actually grew up rooting for the Yankees. But O’Keefe, who sings vocals in a pop music band, is no stranger to singing the National Anthem at professional sporting events; she has performed the National Anthem at MetLife Stadium, Madison Square Garden, Nassau Coliseum and at a Mets game inside Shea Stadium before the baseball team moved to Citi Field in 2008.

“It’s my goal to do all the stadiums in the tri-state area,” said O’Keefe. The National Anthem veteran was calm and confident prior to entering the audition room on Tuesday morning; she still hadn’t decided what song to perform before the judges. “I’m just going to get a feel for the room and the judges and then I’ll wing it,” she said. “If I think about it too hard I’ll get nervous.”

O’Keefe converted to a Mets fan six years ago, because her boyfriend loves the team.

Twenty contestants will receive calls from the judges later today, inviting them back to sing at a final round of Anthem auditions that will take place sometime after the Mets’ Opening Day on April 8.

Neil Fruerstein seemed delighted as he exited the audition room. “It would be arrogant to say I was expecting a call, but I’m definitely hoping,” he said. “No one could do a better job than I just did in there.”