Nadira Sowkey looked down at the text message.

It was from her tenants.

“I think I did enough to make them comfortable,” Sowkey, 44, said from outside the Help Center at the Bronx Housing Court.  She was there to start proceedings to evict the tenants, a family of five, from the North Bronx house with a granite porch she owns with her husband.

Sowkey said the tenants recently threatened to burn down the house, a claim the tenants called  ludicrous in an interview.  The tenants complained of unaddressed structural issues – narrow stairs and cracked floors – which Sowkey dismissed as erroneous. Their rent is $1,900 a month and has not been paid in four months. Sowkey’s own monthly mortgage looms large.

The house is more than an asset to Sowkey: it is home. She lives there with her son and husband, a city bus driver, on the ground floor below her tenants. They are not as much living with a housing conflict, as living in a housing conflict. The two families share a front door. 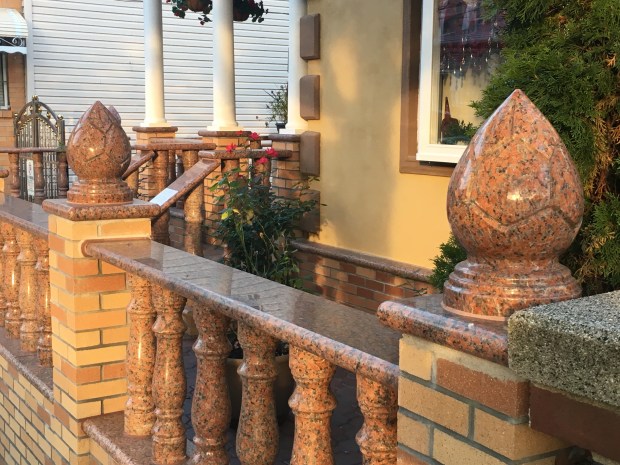 Outside the two-story house Sowkey’s family and her tenants share. (The Ink/Brian Gordon)

Sowkey is a homeowner-landlord, a subset of landlords in New York City’s housing ecosystem who rent out five or fewer units to supplement their income. Many rent a spare room or two when a child moves out or a home is inherited. Lacking the resources of real estate companies, these small-scale landlords often feel vulnerable when confronting the bureaucratic tightrope of eviction cases.  A misstep can set them back months and put their mortgages at risk. And as the city expands legal services to low-income tenants, these homeowner-landlords must often fend for themselves against trained advocates who understand how to navigate housing court.

“Most of the attention has been paid to the tenants because the majority of landlords are represented,” said Miriam Breier, the supervising judge of the Bronx Housing Court. “Small owners, they come to court and they’re at a real disadvantage if they can’t hire attorneys.  They file their own petitions.”

The Bronx Housing Court, where Sowkey waited on a recent Monday with a steely stare, was at times both kinetic and plodding. Attorneys weaved from room to room past a hallway of people looking over forms and thumbing at phones while waiting, often hours, to learn what to do next.

Sowkey hoped to file a non-payment case, the first step toward evicting a tenant and a common proceeding in New York City’s bustling housing courts. More than 50,000 landlord-tenant petitions have been ordered in the Bronx this year according to public records. Unlike the Goliaths of the rental market – whose staff attorneys handle cases every day – Sowkey is a nursing assistant with one property who had never before been to housing court. She had to wade through an unfamiliar legal world.

Sowkey, who said she immigrated from Guyana in her 20s, arrived at the tan brick Housing Court on the Grand Concourse at 10:15 a.m. At 2:30 p.m. she was called into the second floor Help Center for a one-time meeting with an attorney who works for the Housing Court advising both tenants and landlords.  The lawyer told Sowkey to fill out a do-it-yourself rent demand form but advised her that in all likelihood, the tenant would be able to stay at the house until the lease expires on Jan. 1. Fifteen minutes later, Sowkey was sent on her way with a pink packet describing next steps for landlords.

“I think more should have been done, more information should have been provided,” she said. “They see the landlord as an aggressor. People portray you like that. But it’s not in every case.”

If Sowkey were the tenant, she could find advocacy groups online endorsed by New York City Public Advocate Letitia James. And at the courthouse, she would be directed to legal providers such as the Legal Aid Society on the third floor and Legal Services Bronx on the fifth.

In August 2017, as part of an effort to combat exploitative landlord practices, Mayor Bill de Blasio signed Right to Counsel legislation guaranteeing attorneys to tenants making less than 200 percent of the federal poverty line, or $50,200 a year for a family of four. Many legal service providers still take on eviction cases where the tenant makes above the 200 percent threshold, at their own discretion. None represents landlords.

Sowkey’s tenants, who moved into her house in late December 2017, qualify for free counsel. The tenants did not wish to comment on whether they will use the public representation, pay rent or move out at the end of the lease. If they overstay their lease, Sowkey could file what’s called a holdover petition to evict them. Until then, she can file a nonpayment petition or wait.

The instructions to file petitions, coated in jargon, can derail eviction cases at every stage.  First, landlords must properly craft and serve rent demands within strict timeframes. Demands can never be personally delivered by the landlords themselves, for instance. If errors are made, judges can void the demand. Once an official petition for eviction is filed, the process is no less forgiving. “Everybody messes up,” said Breier in an interview at the Housing Court. “Whether you have a lawyer, or you don’t have a lawyer. It happens all the time.”

Errors can send small-scale landlords into a downward vortex. “The smaller landlords get killed here,” said a private attorney who said he represents both landlords and tenants in housing court. The attorney did not wish to go on record, citing professional conflicts. On this day, the attorney handled eleven non-payment cases for a real estate firm, totaling more than $50,000. “My clients, they’ll get their money eventually. They can afford to wait months if they have to,” he said.

Sowkey said she does not have that much time. Mortgage payments of $3050 are due on the first of each month and her family relies on renting out the second floor to cover the cost. According to The Real Deal, foreclosures across New York City in 2017 were at their highest level since the 2008 economic downturn. “I don’t know. I don’t want to think that far,” Sowkey said.

The precise number of homeowner-landlords like Sowkey in New York City is difficult to pin down. The Bronx-based National Homeowner-Landlord Association estimates there could be as many as 10,000 across the five boroughs. The organization has a membership of 650, said Philip D’Erasmo, the executive director.

“Our big challenge is outreach,” said D’Erasmo. The organization has table covered in pamphlets outside the Housing Court on the Grand Concourse as a point of introduction, though Sowkey was unaware of the group, which D’Erasmo started in 2015. 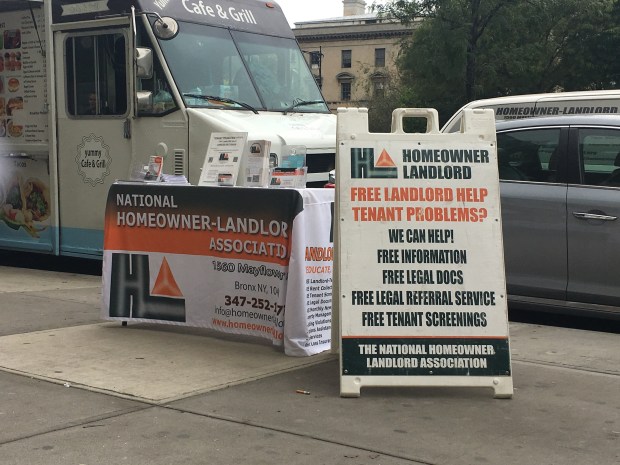 The National Homeowner-Landlord Association has a table outside the Bronx Housing Court. (The Ink/Brian Gordon)

“In a lot of cases, people were getting either no advice, or in a lot of other cases, they’re being charged upwards of $3,000 to $5,000 for a real estate lawyer to take their case and not even handle the case properly,” D’Erasmo said. D’Erasmo is a licensed processor, empowering him to deliver official notices and petitions to tenants.

D’Erasmo founded the nonprofit after being a small-scale landlord of a three-family house in Morris Park. “As soon as I bought the place, tenants stopped paying,” D’Erasmo said. “One tenant found out the other tenant wasn’t paying, so he stopped paying too. Then the third stopped paying. I learn everything the hard way.”

For a membership fee of $495, the organization will oversee an eviction case and match landlords with one of two eviction attorneys it works with on contract. D’Erasmo said the two lawyers fastidiously dot and cross all the I’s a T’s to ensure cases do not restart on technicalities.

Sowkey said she may join the group but needs to learn more. She wants to rent out the upstairs unit again, but only month-to-month to prevent another prolonged conflict.

Sowkey hopes her situation will be resolved within a month. “It’s a long process when you go to court,” she said in an interview at her house. “I’m losing time, I’m losing money.”

For now, Sowkey and her family are managing the tension of living a flight below five people she wishes were not there.