Thousands marched in the streets Tuesday night for the 44th annual Village Halloween Parade only hours after a man in a truck violently mowed down pedestrians along the Hudson River in what Mayor Bill de Blasio described as a “cowardly act of terror.”

The driver, identified by police as 29-year-old Sayfullo Saipov from Uzbekistan, killed eight people and injured 11 more before a police officer shot him in the stomach about four hours before the parade. He was in custody and hospitalized, and a paintball and pellet gun were recovered from the scene.

Despite the tragedy, the Halloween parade drew thousands of locals and out-of-towners, many dressed in elaborate costumes. Before the event began, the New York Police Department tweeted that security would be beefed up at the parade and around the city. 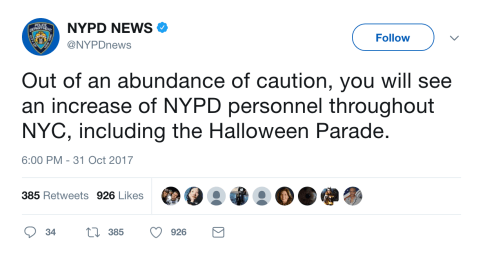 In a late afternoon press conference, de Blasio urged New Yorkers to “be vigilant” and added that “there will be extensive additional deployments of NYPD officers this evening and throughout the days ahead.”

The attack did disrupt some of the night’s festivities. Rob DeVito, 35, owner of Bond Parade Floats in Clifton, New Jersey, said his company had built 10 floats for the parade and that two dropped out after the truck attack.

“There’s always a security concern at parades,” said DeVito. “Sure, you get a little nervous but we put a lot of faith in the NYPD.” DeVito, who was dressed as a character from HBO’s “Game of Thrones,” added, “When you’re a police officer in New York, you’re trained specifically for events like these.”

Jay W. Walker, 50, who attended and marched as part of Gays Against Guns, a group fighting for LGBTQ rights, said fewer people on his team showed up than he was expecting. “We’re seeing a number of people choosing to stay at home, some maybe out of fear and concern for safety,” he said.

Parade participants such as Dia Verano, 36, a Brooklyn resident, however, were undeterred from attending. “I love Halloween,” Verano said. “It’s my favorite day of the year. I thought it would be best to do something with the community and meet new people and do something all together to create a spectacle.”

Rafail Lenoudias, 15, who was visiting New York on a four-day trip from Germany, said the attack did not discourage him from watching the parade from the sidelines. Lenoudias said he was glad to see people enjoying themselves. “The police are very present, but everyone’s smiling,” he said.

Earlier in the day, Jeanne Fleming, the event’s artistic and producing director, said she expected close to 60,000 spectators and participants at the parade, which ran up Sixth Avenue from Spring Street to 16th Street.

This year’s main float was designed by Russian artist Alexei Kazantsev around themes of spirituality, mythology and women’s empowerment. In an interview, the parade’s grand marshal, a Brooklyn-based recording artist named Anjelica, said she hoped the float could have greater meaning for the people of New York.

Jo Macellaro, 26, who joined the parade as part of Rise and Resist, a political action group, said she believed it was safe to participate. “The people who got attacked were going on about their day-to-day,” she said. “It might be safer to be in the parade surrounded by police.”

The NYPD asked the public to share any videos or photographs that could aid with the investigation, urging New Yorkers to stay alert and invoking its motto “If you see something, say something.”

Police Commissioner James P. O’Neill said in a tweet that he was glad to see a large crowd at the Halloween parade. “NYers are resilient and won’t be deterred,” he wrote. 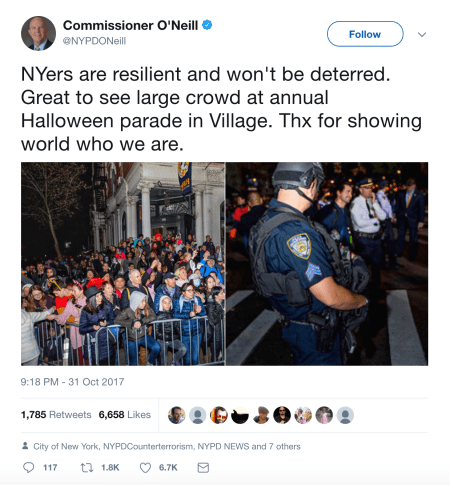 Olivia Dope, who was DJing on the main float alongside Anjelica, said she wanted to stay positive. “I was a little scared, a little shaken up,” she said. “But, I want to make sure the energy is good and we’re spreading love.”

That was Fleming’s goal. “What the parade does is bring all the people together in an imaginative and creative environment,” she said. “If there’s any message, it’s that with imagination and creativity, we can all get along. Let’s make peace, let’s live together. And let’s do it nicely.”

See related: ‘Here to Smile and Look Crazy’ at the Halloween Parade