On Thursday morning, several residents of Queensbridge Houses leaned on the metal railings of one of the housing development’s high-rise buildings marveling at the view of Queensboro Bridge in the distance.

“It’s beautiful,” said Tammy Bentley, a resident of Queensbridge Houses for over 50 years.

Bentley was enjoying the view, but she was more excited by improvements made as part of a comprehensive roof replacement project on the 26 buildings of the Queensbridge Houses. The improvements, which include new metal railings, were unveiled on Thursday, six months ahead of schedule, said Shola Olatoye, chair and chief executive officer of the New York City Housing Authority. City Council Majority Leader Jimmy Van Bramer and State Senator Michael Gianaris joined the event. 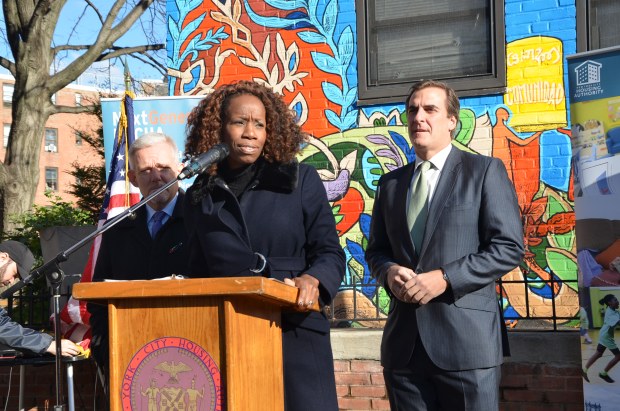 Completed in 1940, the 26 buildings that make up Queensbridge Houses, the country’s largest public housing development, are home to more than 6,500 residents, according to NYCHA. The roof upgrade included installation of about 354,000 square feet of new roofing, five miles of metal rails and repairs to more than 76,000 square feet of exterior brick walls, Olatoye said. The roofs hadn’t been renovated in over 50 years, she added.

“Overall this work will improve the conditions in our residences and apartments and help the authority to save resources that we can invest back into our buildings and residents,” said Olatoye.

Christopher D’Alimonte, the project manager of the NYCHA Bronx/Queens Program Unit who supervised the roof replacement, said construction began in May 2015 and was originally projected to finish by July 2017. Strategic planning and collaboration with contractors led to the early completion, he said. It didn’t hurt that on some days the contractor brought in 400 workers, he said.

“We had a huge work force,” said D’Alimonte.

While leading a tour of the rooftop, D’Alimonte said the new roofs and sealed windows should solve the major problem of leaking and help create a dry and healthy environment inside the buildings.

“Who wants to live in rundown building that is leaking and has a lot of problems?” said D’Alimonte. 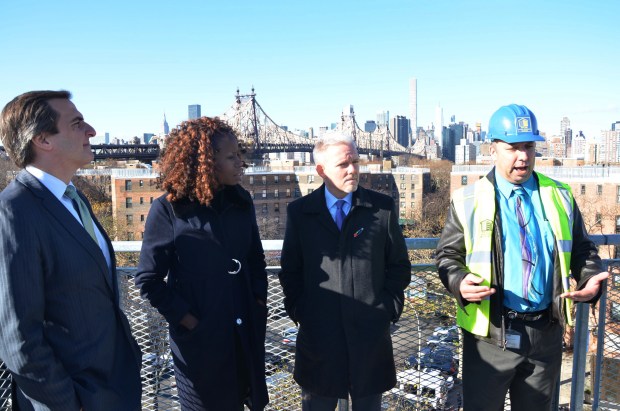 Christopher D’Alimonte (far right), explained about the details of roof replacement during the rooftop tour. (The Ink/ Xuejie Zhao)

New metal railings on each roof should be cheaper to maintain than the previous brick parapets, D’Alimonte said. They also enhance security because no one can hide behind them, he added.

Bentley said the new roof is much safer for people passing by on the ground level.

Older roofs had gravel surfaces, and kids used to throw the rocks from the top. “Now we don’t have to worry about anything coming down the roof on our head,” she said.

Audrey Hilliard, 66, another Queensbridge resident, said the construction initially created noise and was disrupting. But now she thinks it was worth it.

“I live on the sixth floor and had leaking problems,” said Hilliard. “Now they have the improvements, and I have no leaks.”

The roof replacement project at Queensbridge cost $87 million, with $60 million coming from the city and $27 million from federal funds, according to the Mayor’s office. It is part of the $300 million roof upgrade in NYCHA buildings across the city. The Sotomayor Houses in the Bronx are next up for roof renovation, said Olatoye.

“NYCHA has 17 billion [dollars] of capital needs,” said Olatoye. “Our buildings have not been invested in. The only way to do it is to start. So we are finished here, and now we are moving to the next.”

Gianaris said he had been working closely with local representatives like Van Bramer to allocate funding to public housing projects. Van Bramer said he is hoping for more infrastructure improvements inside Queensbridge and on a nearby playground.

“The common living areas are important, and they need to have a good set of repairs as well,” said Van Bramer.

Other NYCHA projects underway at Queensbridge Houses include a $10 million broadband initiative to bring free Wi-Fi access, $1.65 million in grounds improvements and projects to enhance lighting and install security cameras.