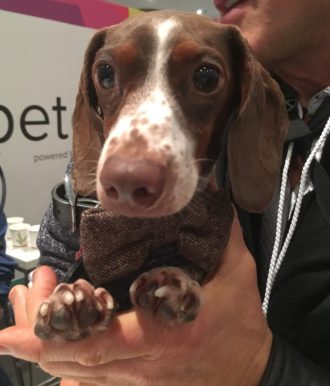 Meatball was shaking. And no wonder. The eight-pound piebald dachshund with big brown eyes was surrounded by hundreds of people as he entered the Javits Center on Saturday with his owner Tony Hayden. They had just checked in at PetCon, an extravaganza where fans can meet the celebrity dogs they follow on social media. Wearing a “talent” lanyard around his neck, Hayden held Meatball in one arm as they made their way into the chaos. Dogs were being dressed up and photographed. Owners were giving interviews. Hayden greeted friends, human and canine, and headed to the VIP area to get his bearings and give Meatball a break before his meet and greet.

It was a scene Hayden, 55, never imagined on the day he met Meatball almost four years ago and  committed to taking care of the tiny, malnourished dog that could barely walk and suffered from cerebellar hypoplasia, the canine version of cerebral palsy. A hair salon owner, Hayden, had flown to Knoxville, Tenn. from his home in Orlando, Fla. expecting to pick up a healthy seven-week-old puppy from a breeder he’d connected with online. Instead, he arrived to find a dog that seemed to be neglected and near death.

“He looked like a tiny baby squirrel,” Hayden said. When they handed him the quivering puppy, “I kind of started crying,” he said. Hayden didn’t know what was wrong, but he knew he needed to get the dog away from there.

And thus began Meatball’s road to fame. Hayden gave Meatball physical therapy and took him to acupuncture sessions. “I would tie cookies to a mop,” Hayden said. “I just had to find what he wanted to chase.” Within months, Meatball learned to walk. Then he learned to run. Meanwhile, Hayden was documenting Meatball’s progress on Instagram, and people loved him.

“It was like a slot machine,” Hayden said, referring to his phone lighting up with notifications. “I couldn’t read the notification before the next one popped up. I had never seen when something goes viral.”

Now, four years later, Meatball’s disability is no longer immediately obvious. He has a slightly awkward gait, but otherwise can walk, run and play like any dog. His journey has made him famous. Meatball has over 160,000 followers on his Instagram account, herecomesmeatball. He is represented by The Dog Agency, which connects Instagram-famous dogs with brands that use them for marketing. The agency, which sponsors PetCon, paid for Meatball and Hayden to fly to New York for the weekend to meet and greet fans for the second year in a row.

And they were eager to meet him. Wendy Smith from South Carolina, cried when she saw Meatball, the little dog she has loved from afar. Smith, 55, told Hayden how much she appreciates the holistic methods he used to help strengthen Meatball’s legs. “He took in a challenged dog,” she said. “I think an average person would have taken them back or taken them to a shelter.” Smith noted that she has her own medical issues and that she hopes someone will take care of her like Hayden took care of Meatball should the need arise.

Hayden, of course, documented Meatball’s journey to New York City with regular posts on Instagram, including a visit to Central Park sponsored by Lyft. His video posts showed a happy, playful dog prancing in the snow for the first time and chasing a ball down the hotel hallway. What the videos didn’t show was Meatball’s anxiety. “I am an amazing photographer because I create a narrative that might not be 100 percent true,” Hayden said in an interview at the Javits Center. He’d been up throwing the ball for Meatball at 5 a.m. to tire him out before arriving at PetCon. “Events like this are really difficult for Meatball,” Hayden said. “He’s a one-on-one dog.”

Hayden said he hopes that exposing Meatball to crowds will help him become more social.

But Meatball wasn’t too exuberant during his one-hour meet and greet, which started at noon and had a steady line of people waiting until 1 p.m. One of the first in line was Susan Yany of Queens, wearing a Meatball T-shirt. Others walked by, spotted the small celebrity and said, “It’s Meatball!” before getting in line. When admirers reached out to pet him, Hayden warned them to “go low and slow” and then posed for pictures. Meatball met dozens of fans and was so calm he fell asleep at one point. Hayden said Meatball was not on medication. He was just tired after his early morning game of fetch in the hotel hallway.

As the fans walked off, they scrolled through their phones, checking out the pictures. “He’s so cute,” one said. Another skipped away, saying, “That was awesome!”

When the meet and greet ended, Meatball went backstage for some alone time. He perked up when Hayden took out a squeaky toy, chasing it around on the floor. Hayden was happy with how things went but isn’t sure he’ll come back next year. He doesn’t do it for money, he said, and he had to take time off his full-time job. “It’s not easy to be here,” he said. “But seeing people wearing his shirt, hearing them say that they came here to meet him, that’s why I came here. People were lit up with joy to meet him.” Meatball stuck his head into Hayden’s bag looking for more toys. “You did well Meatball,” Hayden said, feeding him a couple pieces of popcorn. “I’m very proud.”