Though Courtney Love, a senior linebacker from the University of Kentucky, is 24 days away from playing in the Music City Bowl, he already has a prestigious trophy.

Love, 23, was announced the winner Tuesday of the 2017 Wuerffel Trophy, which rewards exemplary community service by a college football player. The award is named after Danny Wuerffel, a 1996 Heisman Trophy winner and former University of Florida quarterback. Wuerffel announced the winner and finalists at a news conference sponsored by the National Football Foundation at the New York Hilton Midtown Hotel.

“The mission of the Wuerffel Trophy is to shine a spotlight on all of those good works going on all over the country,” said Wuerffel, 43.

Love, who is from Youngstown, Ohio, focused much of his community service on mentoring children at the nonprofit Amachi Central Kentucky, which connects adults with children whose parents are in prison.

Love’s father was incarcerated for two years starting when Love was 10 years old. Love’s grandmother and his father’s girlfriend took care of him while his father was in prison. Love’s mother was not involved in caring for her son.

Love has also helped build houses in Ethiopia and has delivered food to needy families.

At Kentucky, Love excelled academically and was named to the 2016 Southeastern Conference Honor Roll. He earned a B.A. in May in community and leadership development and is working toward a second degree in communications before he officially graduates from the university.

“It is an honor and a blessing to be here,” said Love, smiling broadly as he received the trophy.

At the awards ceremony, Love reflected on how he has persevered through various challenges in his life. “You really have to remain constant to your core values, things that you really believe in, like accountability and responsibility,” said Love.

Love had standout games against Louisville and Missouri this season with 10 tackles in each game, a career high. For the season, Love has 82 tackles and two fumble recoveries. He has served as a captain in all 12 of Kentucky’s regular season games. Teams often change captains between games depending upon performance in practice and in recent games.

Following the award announcement, Mitch Barnhart, 58, the director of athletics at Kentucky, tweeted “This is who we aspire to be, #BBN. This young man has earned our admiration and support for all he’s done for Kentucky – both the school and the Commonwealth. 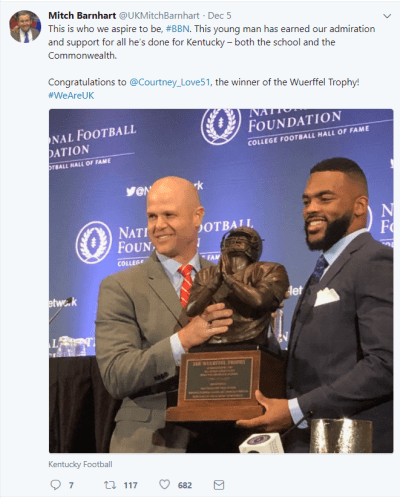 In Love’s final collegiate game, unranked Kentucky will battle No. 20 Northwestern in the Music City Bowl on December 29 at Nissan Stadium in Nashville, Tennessee.

Previous winners of the Wuerffel Trophy include Trevor Knight of Texas A&M University in 2016; Ty Darlington of University of Oklahoma in 2015; and Deterrian Shackelford of the University of Mississippi in 2014.